We hear about the skills gap all the time, but where does this gap come from and what are the facts behind this term?

The core of the problem is that baby boomers are retiring out of skilled trades jobs and many younger people are, for a variety of reasons, choosing alternate paths. According to Adecco, over half of American skilled trades workers are over 45 and 62% of firms struggle to fill skilled trades positions. While skilled trades jobs were the core of the middle class when the boomers were coming of age, now the workforce is more diffuse. Caterpillar notes that only one third of parents today encourage their kids to go into the trades. 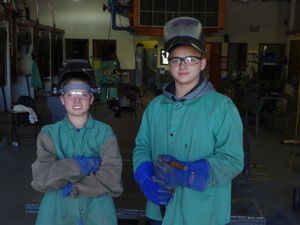 These trends have led to some grim bulk statistics. A report released this year from Deloitte and the National Association of Manufacturers explains that 3.5 million manufacturing jobs will need to be filled in the next decades, and only about 1.5 million of them will be:

skilled workforce, including loss of embedded knowledge due to movement of experienced workers, a negative image of the manufacturing industry among younger generations, lack of STEM (science, technology, engineering and mathematics) skills among workers, and a gradual decline of technical education programs in public high schools.”

What does the skills gap look like on the ground? Employers we talked to cite hiring as one of their biggest pain points. Joseph Bohm of Dual Fuel said that on a scale of 1-10, his hiring difficulty is a 10.

“It’s not the process, but the quality of candidates,” Bohm explains.

Blake Foster, who owns SpeedShop in Utah, has had the same problem.

“I don’t want to sift thru McDonalds resumes to get a welder or sales VP,” says Foster. To test out candidates, Foster starts by giving them a piece of scrap metal and a tig welder, and asks them to weld anything.

“Most guys don’t even check if gas is on,” he says. “It’s not even worth talking if they can’t weld.”

Of course, the skills gap gets wider or smaller based on location and profession. Companies that hire at various locations around the country find that certain areas have more skilled trades workers than others.

“Right now, in the US, it depends on the role. Our bread and butter operators at refineries are pretty easy….That’s like a 2,” says Will Wingard of Shell, using the 1-10 scale. “When you’re talking about trades/crafts — machinists, mechanics, millwrights, technicians, more like a 6 or a 7 or here in California, it’s more like an 8 or 9.”

The difficulty in hiring is large enough to affect how some companies are structured.

“Just our recruiting and advertising costs have doubled,” notes Karen Siravo of Crown Services. “I think its a reaction to the tightening labor pool. We’re spending more money to get them in the door.”

The skills gap is real, and it’s only getting wider. Everyone from trade schools to recruiters to policymakers will need to figure out how best to operate in this economy.

← What’s the right skilled trade training program for me?
→ How 50% of hires made at a Bridgestone hiring event came from one announcement on WorkHands