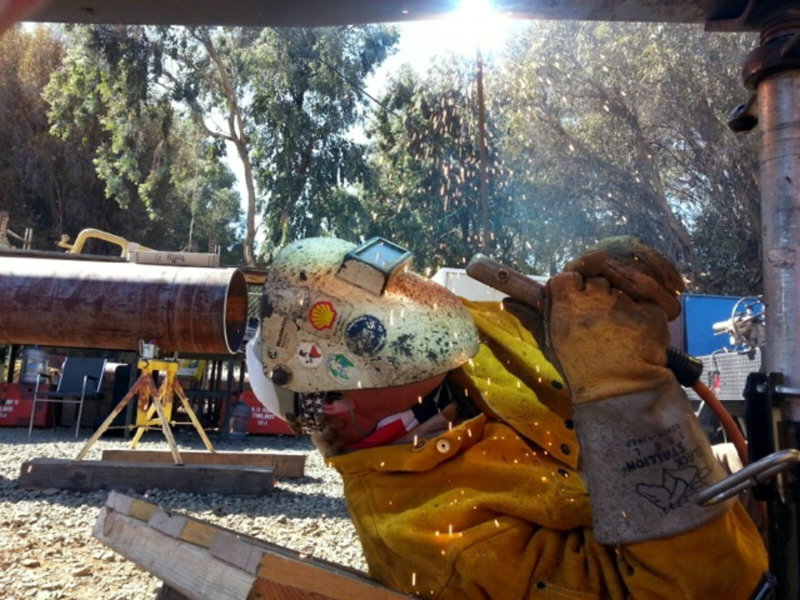 I obtained 2 Fibre-Metal ‘Pipeliners’ around February. Initially I had planned on reviewing one with Sellstrom’s Lift Front Adapter and one unmodified at the same time, but the modified version is awaiting a paint job. So, for now we have the stock version, and a Jackson Huntsman to compare it to.

Time to get down to the nitty gritty. This is the first pipeliner I have used having previously used a Jackson Huntsman and several other versions of the Huntsman line. Immediately the weight difference between the two is very noticeable, the pipeliner is significantly lighter. They both have different versions of the plastic nuts that are tightened to adjust the tension on the head gear that keep the hood up, both are less than ideal.

For head gear, the Jackson uses a ratchet type which adjusts snugly and stays fitted. The Fibre Metal Pipeliner comes with your standard head gear (strap over the middle of the head and around the forehead), but uses a thick rubber belt that is pulled from both ends to adjust tension on the back of the head. I don’t know how else to say it so I’ll be blunt, IT SUCKS! It might stay put for a minute or two, but as soon as you flip your hood down it’s back loose. There is a remedy though that has been around for years and keeps the hood secure while adding comfort, and that is using a piece of surgical tubing in place of the rubber belt. It is laced though the retainers just as the belt it’s replacing and secured on both ends using electrical tape. This keeps the head gear snug while keeping your head comfortable.

The light weight of pipeliner allows the user to wear it for multiple hours without suffering neck fatigue. After using the Huntsman, I would sometimes forget I had it on my head, especially once I installed the surgical tubing. The size of the shell provides excellent protection from sparks from nearly every angle except behind you. This comes at a price though as the length of the hood limits your ability to look down at your work because it hits you in the chest. This is easily remedied though by removing a 3/4″ or so strip of material from the bottom, thus further reducing the weight.

The lens retaining system is pretty standard, you insert your lenses, a plastic spacer, then install the plastic retainer. It works great and allows for use of thicker clear (glass) lenses or ‘cheater’ lenses without modification.

As for durability, there is a reason this hood has been around for so long and is widely used in the field (and in the shop), it’s damn near bulletproof. Although I’ve only been using mine for a brief period of time, it has been dropped, had stuff dropped on it and with the exception of some nicks and burns on the white paint, it is essentially still brand new. I have worked with welders that have had theirs for numerous years, on numerous jobs, in numerous conditions, and aside from the appearance they still work just as well as they did on day one.

So, is it worth the $50 price tag? Absolutely, the Fibre-Metal Pipeliner hood is a sound investment whether you are a hobbyist or rig welder.

I will be reviewing the modified flip front version in the coming weeks so, stay tuned.

← Plan F :: I lament — Wondering if and when the Hybrid Renewable Energy Engineer job description will become a norm
→ America facing a Skilled Trades Gap after the Great Recession