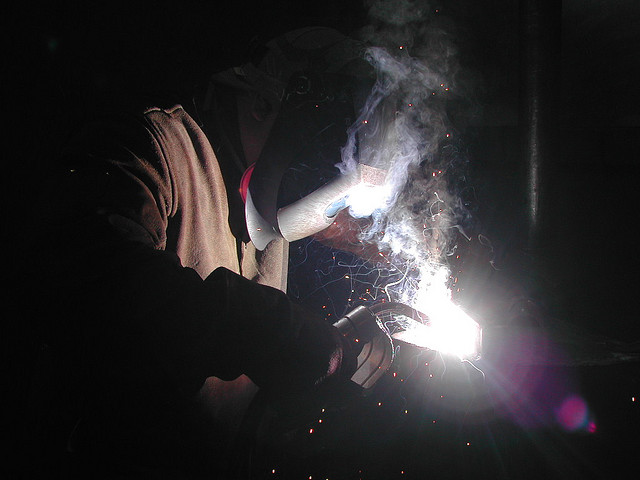 When I got my notice in  April of 2013 that a layoff was coming, I began looking in to trade school. I contacted Fox Valley Technical College (Wisconsin) to see what I needed to enroll in the fall 2013 semester. My plan was to attend their Welding Production program.

The first thing my wife and I did was budget our money so that we were able to pay our bills on time. After some number crunching we were happy to find we’d be able to pay our bills with one income and as it turns out, we even had enough to splurge twice a month to enjoy ourselves. It took almost a month before I was able to collect unemployment (and as of January 2014 my benefits have been exhausted).

I was officially laid off on a Friday in June of 2013. The following Monday I had an appointment with Workforce Development to discuss a dislocated worker voucher to help me with my schooling. Multiple appointments later I was awarded $1,000 per semester to help with schooling.

Following the layoff I attended the new student orientation. It was there I received all the pertinent info I necessary to start school in August (The tech school staff were a pleasure assisting me with making sure I was able to start in the fall).

I completed my first semester in December with a B average. I never would have pictured myself going back to school, especially after being out for near 10 years. I’ve worked 9 years in manufacturing, four of those years at Oshkosh Corporation in Oshkosh, WI and the other years at Quad graphics in Lomira.

During my first semester I used multiple processes (GMAW, SMAW, PAW, and OFW) on a variety of metals including carbon steel, stainless, and aluminum. I also learned print reading and AutoCAD. Currently I am learning GTAW, FCAW, & Robotic Welding processes and learning to program Fanuc, ABB, Panasonic, and OTC Daihen machines. If you asked me how I’m doing in school at the moment, I’d have to answer with, Awesome!

With my second semester nearing completion, I’ve began searching for a job in my chosen trade. Many places I have applied want (require) 3-5 years of welding experience, some wouldn’t even give me an opportunity to interview. I attended multiple job fairs and got a few leads, but the jobs had been filled. I’m currently still trying to find a part-time job while still in welding school, but it’s very difficult to do because my classes are from 11am-5pm or 12pm-4pm. Most places are full with part-time help or will only hire me full-time once I complete my schooling. My refusal to go to a temp agency hasn’t been very helpful either.

Beaten, but not broken, I decided to test my luck again at another job fair, last Saturday. After 3.5 hours, I’m happy to report, I was offered a direct hire job! They weren’t sure on details but would contact me in the days to come.

Tuesday I received a call asking if I’m still interested in the job, my obvious reply was, “yes.” They informed me a managers meeting would be held to discuss where they needed welders, but would let me know soon. Later that day I received a call to see if I wanted to take a 2nd shift (1:30pm-9:30pm), Welder II (mostly programming robots) position, I was really excited and agreed to it immediately. From here I was given the information required to take my drug screen & background check and given my tentative start date, May 19th (I graduate on the 18th with a technical diploma).

My instructor said the company is a good one and the starting pay is around the average for someone with a technical diploma. He also reminded me that the school will always be there for me should I decided a few months or years down the road that I want to brush up on my skills for a weld test or if an employer asks for it.

Thanks to wife for supporting my decision to go back to school, it was a few tough months.

← Know Your Trade, Know Your Wages
→ What To Wear To A Trade Interview