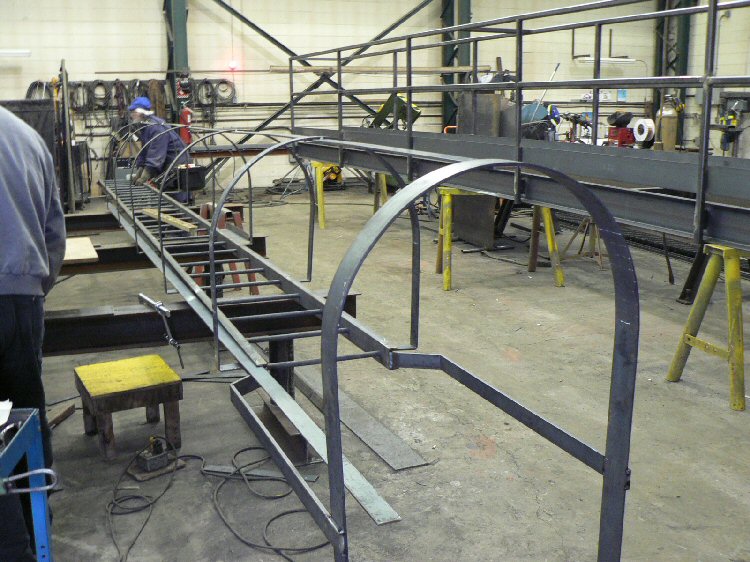 So there I was, soaking up the what, why and how of all the different departments in our fabrication shop. We had quite a group of guys working there, including several who had been in Vietnam recently. Some were gung-ho about it, while others glared at my questions or told me to shut up and get back to work. Watching Sons of Anarchy now, I see a reflection of some of these guys with their choppers and tattoos, especially the ones who were given the choice of going to jail or ‘Nam.

One of the best fitters in our fabrication shop was a crusty kraut named Gunther Pfutzenreuter (say that 3 times fast!). I enjoyed practicing my German with him and he showed me how to straighten heavy plate steel by heating it cherry red and then quenching it with a water hose to shrink the concave side in to alignment. He managed to pull a 3/16″ gap in to no more than 1/64″ over a 3 ft. area. It seemed like magic at the time, but he said it was only amazing for an American. For a German, it was no big deal. (Typical germanic mindset, all humility and kindness…)

I quickly learned which gases, tools and filler material to use for different metals in the weld shop. Our best welder once had to fill a huge gap in aluminum plate and devised MIG/TIG, whereby he ran the MIG gun with his right hand and fed 1/8″ round stock in to the weld puddle with his left hand. We laughed a lot about that and he constantly told me he needed a raise for his invention. He learned his trade repairing shot up aircraft in Vietnam, saying the worst part was the smell from welding up an area that hadn’t had all the blood/guts washed out well. The next worse was “finding” live ammo that had dropped in to hiding places and having it go off in mid-weld, usually while in some tortuous position. Now that is some rugged On The Job Training right there.

The sheet metal guys showed me the hydraulic press to straighten assembled units that were banana shaped after welding. I did OK there after some good coaching and moved on to seeing how flat I could mash things with that hydraulic press, starting with soda cans and “ending” with a guy’s lunch box. As beautiful as the experiment was with salami sandwich and apple oozing out of his microscopically thin lunchbox, I think he was actually kind of mad about it. He had it coming though, being a habitual tool thief. Unwritten rule 13 states: steal a crescent wrench, lose your lunch.

Of course, he was subtle about his revenge for my pressing his lunch box. Weeks later he asked me to hand him the big chunk of aluminum on his table. As I grabbed it, my 20 year old mind, distracted by girls and motorcycles and weekend planning, was sent an urgent, frantic, angry message by my hand. “Put that red hot gosh darn chunk of aluminum DOWN, NOW!!” It turns out that aluminum doesn’t turn red or discolor when you heat it up like steel.

The lesson here is either: don’t mash people’s lunch boxes (borrring) or check every surface in the weld and fab shop before you contact it with your delicate lily white skin. That applies for most any place. Most anything over 120F will hurt you, and the hurt goes up proportionally from there. That includes the machine shop, the auto shop and the kitchen too. A glass casserole dish coming out of a 350 degree oven is as dangerous as cutting torch splatter, and maybe more so depending on who is operating the casserole dish!